Goliath Tiger Fish is one of the most fearsome killers freshwater has ever found. It got ranked as one of the top 10 hardest-fighting freshwater fish on the world by “Fisherman’ magazine”.

For more info and where to buy goliath african tigerfish:
http://www.globalaquaticsinc.com/2012/08/exotics-special-goliath-african.html

It can weigh over 100 pounds and its mouth is armed with 32 razor-sharp teeth which can shear trough the strongest steel leaders and even straighten hooks. Goliath tiger fishes can found in many rivers and lakes on the continent.


Mostly, Goliath Tiger Fish is found in the Congo River system being the largest of the family, which is one of the recognizable and ordinary species in Southern Africa. Its teeth are as sharp as knife and its jaws and muscles are very strong.

It can grow up to 24 inches. Mostly it is seen in three color silver-white-grey, but some times these fishes also found in a metallic orange or yellow sheen. It is the only fish which can live in water impure by sulfur, According to research. 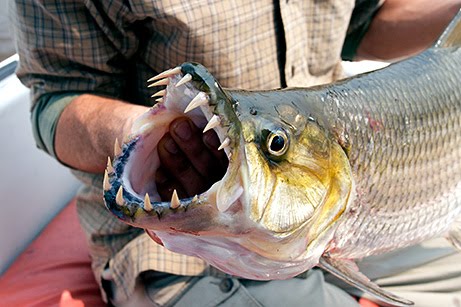 The Goliath Tigerfish caught between dawn and nightfall. The Goliath is a difficult fish to catch. A 30-40 pound fish is considered a great catch, while 50-60 pounders would be a monster.

As if sharks weren't enough to embed fear in the hearts of swimmers all over the world, there is an entire host of creepy creatures that somehow managed to make it into the 'fish' category. Each and every one featured has definitely earned its spot on this list of the top ten creepiest fish in the world!

Last, but not least, on the top ten creepiest fish list is the viperfish. This toothy sea dweller is one of the most fierce predators of the deep. The fangs of a viper fish not only do not fit in its mouth, but they curve all the way back to the fish's eyes! The long dorsal spine of this fearsome looking creature is tipped with a photophore, a light-producing organ. Prey is thought to be attracted by the flashing on and off of this while the viperfish hangs motionless in the water.
Vipers have a hinged skull which they rotate up in order to swallow bigger prey. Their large stomachs can expand up to twice it's normal size allowing them to stock up on food when it is plentiful. Fortunately for us humans, a viperfish eats crustations such as shrimp and hermit crabs as well as anchovies, mackerel, and other little fish.