Bright beautiful and full of life, rainbow fish are ideal inhabitants for your tropical aquarium. They're hardy by nature, comparatively resistant to disease, and peaceful in temperament. You couldn't find a better kind of fish to begin with.

So named for their bright, changeable colours, rainbow fish may puzzle you if you buy them when they're young, as they're very plain looking then. Bright colours develop in response to changes in social status, and with the onset of sexual maturity. They are at their most vivid during spawning. Rainbow fish are happiest living in shoals of at least six, and this will bring out their colours. 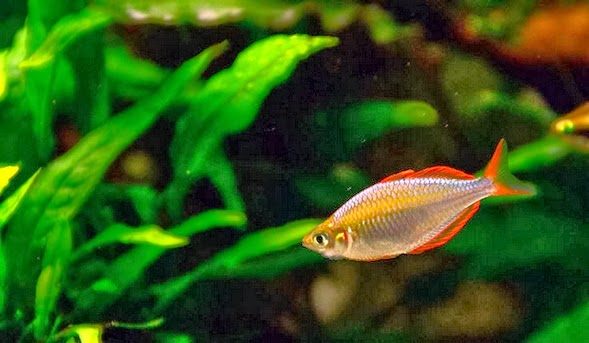 Although they will occasionally chase fish of other species, they have hardly ever been known to bite them, and they are generally peaceful fish who will get on with all kinds of other aquarium inhabitants. They're fast enough to be able to look after themselves in the presence of more aggressive fish, but do better if provided with plenty of hiding places, especially thickets of plants. Because of their speed you should make sure that they have plenty of open space to swim about.

The ideal diets of rainbow fish vary by species, but they can all do well on a basic diet of flakes and freeze dried food, with occasional meals of live brine shrimp or bloodworm. They may sometimes come into conflict with barbs and danios when competing for food.

Most rainbow fish need neutral water and are fairly hardy when it comes to water quality, though sudden changes will distress them. The trick to keeping them successfully is to change about fifteen percent of the water in your aquarium two to three times per week.

There are numerous species of rainbow fish to choose from. Fortunately, most will happily shoal together provided that you have at least one male and one female of each kind, so you can keep two or three species in your community tank. 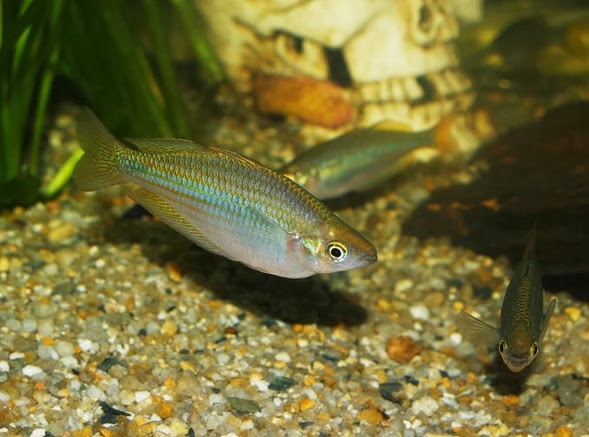 Rainbow fish are comparatively easy to sex, as the males of most species have much brighter colours than the females as well as having more slender bodies. They should be bred in a separate spawning tank with a slightly lowered pH and plenty of vegetation. For minimum stress, breed two or more females with three or more males at any given time, giving the fish more choice of partner and making it less likely that any one fish will be exhausted by aggressive chasing.

True hermaphroditism (having sets of both male and female organs) occurs in some species of rainbow fish. These unusual individuals are still fertile and should be selected for breeding according to the behaviour they display in the shoal.

If rainbow fish are well fed they can be left with their young, with males guarding them, but this is risky, as they may sometimes decide to eat them. For best results you should be prepared to remove the parents.
Rainbow fish are highly adaptable, active little fish well suited to aquarium life. Whether you're looking for an attractive single species to focus on or a friendly choice to fill out your community tank, they're one of the best options available.