Types of Saltwater Fish According to Feeding

Choosing foods appropriate for your saltwater or marine fish aquarium should pose little difficulty if you keep a few basic points in mind. Saltwater fish tend to be specialists when it comes to food. Quite a few vegetarians exist, for example. Some of them feed on many types of algae, others need a specific kind. Carnivores can usually be satisfied with a varied diet, but some feed only on specific classes of food, such as crustaceans.

Many predatory saltwater fish need the movement of living prey to stimulate their feeding response, and only learn to eat nonliving foods as a result of the aquarist’s efforts. I have already mentioned that species with strongly specialized feeding requirements, such as coral-eating butterflyfishes, should be avoided altogether. I provide feeding recommendations at various points throughout the book, usually when a given type of fish is first discussed. 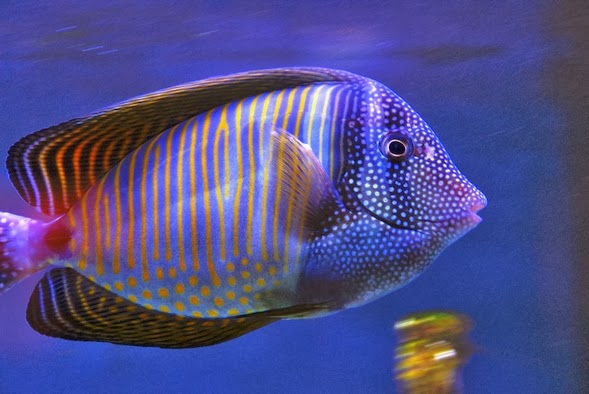 Feeding Marine Invertebrates
Marine fish grab food and swallow it. Feeding them is straightforward. Invertebrates, on the other hand, provide some special challenges. Invertebrates exhibit a variety of feeding methods, from hunting to straining the surrounding water for particulate food items. As a result, they require captive diets tailored to those methods. Some soft corals, for example, rely entirely on the photosynthesis carried out by their symbiotic algae, and thus need no food at all provided lighting is sufficiently intense. The majority of corals also has symbiotic algae but nevertheless consume small particles of food when it is available. Some invertebrates feed almost continuously, others only at certain times of the day. Let’s consider each feeding strategy you are likely to encounter.


SALTWATER FILTER FEEDERS
Filter feeders strain the surrounding water for particles of food. Usually, a particular animal specializes in particles of a certain size and has a feeding apparatus designed accordingly. Fanworms provide a good example. The worm’s fan of feathery radioles entraps food particles and secretes mucus in which the food becomes embedded, preventing it from simply washing back into the sea.

Along the midrib of each radiole, tiny hairs beat back and forth, creating a current that directs the mucus-coated food to the mouth, located at the center of the fan. Fanworms specialize in dust-sized particles and usually subsist quite well in a mature tank without specialized feeding. They respond well to small amounts of fish or shrimp juice, and they appear to capture brine shrimp nauplii, also.

Other types of filter-feeding invertebrates include sponges, which remove extremely small particles, such as bacterial cells, from the water. In fact, most sessile encrusting invertebrates are filter feeders. Virtually all corals and other coelenterates are capable of feeding this way to supplement photosynthesis. The nonphoto synthetic corals require feeding with brine shrimp and other products several times a day. Some species may feed only at night, others feed continuously. You can usually tell if a specimen is actively feeding, because its tentacles, radioles, or other apparatus is visible.

SALTWATER SCAVENGERS
Quite a few common invertebrates can be included in this group. Hermit crabs, shrimps, and brittlestars all scour the aquarium and seldom need to be deliberately fed. They perform a valuable service by cleaning up food missed by the other inhabitants of the tank.

SALTWATER GRAZERS
This group includes critters placed into the tank primarily for algae control. Snails and small hermit crabs constitute the “lawn-care” patrol. Sea urchins also feed on algae but are not above munching a piece of shrimp unnoticed by the fish. Larger invertebrates that need a steady diet of algae will eat fresh or dried seaweed or frozen foods containing a high proportion of green matter.

SALTWATER PREDATORS
A few invertebrates are active hunters, and many are capable of subduing a tank mate and killing it when no other food is available. Starfish, for example, normally feed off sessile invertebrates and bivalve mollusks. Predatory starfish can be distinguished from brittle stars because the latter have flexible, snaky arms, while the former are shaped like the stars on the American flag.

The larger the starfish, the more likely it hunts for a living. Lobsters and crabs of all types, with the exception of anemone crabs, feed both by scavenging and predation. Large crustaceans of any kind are not to be trusted with small fish or delicate sessile invertebrates.

Similarly, large snails are usually predatory, unless they have been sold specifically for algae control. Any of these invertebrates can be kept in an otherwise fish-only aquarium, assuming the fish won’t pose a threat to
them. They are not good choices for a miniature reef tank.

SALTWATER  PHOTOSYNTHESIZERS
As already discussed, many invertebrates manufacture their own food with the help of symbiotic algae. Nearly all of these, with the exception of giant clams and a few types of coral, also feed on brine shrimp, uneaten fish food, and even fish feces that happen to fall on them. In this way, they obtain important nutrients not supplied by their symbiotic algae.

A piece the size of a bean is adequate for a four-inch-diameter anemone, measured when fully expanded. Increase the size of the food in
proportion to the diameter of the oral disk for larger anemones.

SALTWATER SPECIALIZED FEEDERS
Many types of invertebrates have specialized food requirements that cannot be easily met by everyone. If you are considering purchasing an unfamiliar specimen, make sure you understand its feeding requirements
before you commit. Some mollusks, for example, require living corals as food. The beautiful harlequin shrimp
feeds only on the tube feet of living starfish! With diligence, such specialists can be accommodated, but make
sure you are up to the task.