Foods and Feeding of Saltwater Fish

Availability of Foods for Saltwater Fish

Commercial fish foods can consist either of a single ingredient, such as freeze-dried brine shrimp, or a compound of many ingredients, such as most flake foods. The trick to providing a balanced diet for your aquarium is to feed a wide variety of foods, alternating among two or three kinds during the course of a week. If your fish are primarily vegetarian, you will find products made just for them. Supplement these with small amounts of animal protein, frozen brine shrimp, for example. Conversely, if your fish are primarily carnivorous, supplement their diet with small amounts of vegetable matter, such as products containing saltwater algae.

Fish food may be supplied as flakes or as pellets, in freeze-dried form or frozen. Many dealers also stock live foods. 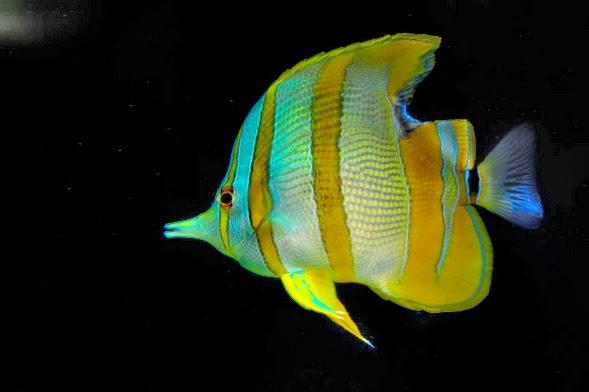 Beginning aquarists usually give too much food. This results in an excessive load on the filtration system, since uneaten food simply decays on the bottom of the tank. The notion that fish will eat themselves to death is nonsense, but the pollution in an overfed aquarium can certainly wipe out its inhabitants.

A fish’s stomach approximates the size of its eye. Obviously, it will not take a lot of food to fill it up. One rule of thumb is to feed only as much as will be consumed in ten minutes. You can determine the correct amount for your situation by trial and error. When in doubt, feed less. Fish can go for a surprisingly long time, weeks in many cases, without eating, so the likelihood of starving them is quite small in comparison to the likelihood of polluting the tank with uneaten food.

Most people find twice daily feedings work best with their schedule. If your schedule permits, though, feed a community of smaller fish about five times daily with just a tiny pinch of food at each feeding. Feed about an hour after the lights come on in the morning, and again about an hour before darkness falls. You will need to modify this schedule if you have, for example, large predators like groupers and lion fish. For these, the usual feeding regimen is three or four times a week. On the other hand, vegetarians feed almost continuously. These fish do best when there is plenty of algae growing in the tank to supplement the twice daily feedings.

Be careful not to feed vegetarian fish a diet rich in animal protein, even though they may eat such food greedily. The vegetarian digestive system is not designed to cope with such a diet, and problems will develop. Similarly, fish that need plenty of animal protein will not get enough to eat if kept on a diet better suited to vegetarians.

In the natural environment, of course, diets consist mostly of living foods. Some live foods can be cultured at home, provided you have the time and inclination. Ideally, one would feed only live food, but this is usually impractical at home.

Live Foods from the Aquarium Store for Saltwater Fish

Virtually all aquarium dealers stock feeder goldfish. They are sold by the dozen and keep well for a week or so in a small, aerated container. Ten gallons of water accommodates about one dozen. Instead of a glass tank, you can use a plastic trash can outfitted with an airstone. Goldfish do fine in cold water and can be kept outside year round, as long as the water does not freeze. If you only purchase, let’s say, a dozen a week, change the water between batches of goldfish. Unfortunately, only large, predatory tropical fish will consume them, so feeder goldfish are not for every aquarist.


You can also buy feeder guppies by the dozen at the aquarium shop. They will be eaten by any fish large enough to swallow them. Since they breed continuously, you can have many different sizes of guppies, from newborn to adult, available at all times to suit the varied sizes of fish in your aquarium. Fifty adult guppies are fine in ten gallons of water, provided it is well aerated and the water is changed between batches of feeders. They can tolerate water temperatures down to about 50°F, and so can be kept in an unheated garage or out- building during the winter. In warm weather, they thrive in a small outdoor pond or child’s plastic wading pool located away from direct sunlight. To maintain a high population density, the aquarium or pond requires filtration or a weekly change of half the water.

Some shops stock live blackworms. These are small relatives of the earthworm that live in clean, cold water. Shops sell them in portions of a tablespoon or two. Purchase a shallow plastic food-storage container at the grocery store. The ones designed to hold a sandwich are perfect. Place the blackworms in the container and cover them with no more than a quarter inch of tap water. Store in the refrigerator. Remove a few worms every day with a spoon and feed them to your fish. Rinse the worms and change their water each day.

Simply pour off as much as you can and replenish with cold water straight from the tap. Repeat a couple of times until the water rinses off clear. Treated this way, the worms will keep a week or two easily. The hard part about keeping blackworms is negotiating with the other members of the household regarding the refrigerator space. Live adult brine shrimp can be found on the menu at many good aquarium shops, particularly those that stock saltwater fish. They are usually sold in portions amounting to about two teaspoons when the shrimp are drained in a net. Because they don’t keep too well without careful attention, it is best to purchase a small quantity and feed them to the tank within a couple of days. Use a net to separate the shrimp from the strong salt solution in which they grow. Rinse under the tap before adding to the aquarium. They will die within about an hour in fresh water. Therefore, make sure to feed only the amount likely to be eaten by your fish within a short time

With the exception of brine shrimp, the foods just mentioned should not be fed exclusively to your saltwater fish. Their nutritional needs are better met by foods derived from marine sources. Live marine feeder fish are impractical as food unless the aquarium is near the ocean. It is therefore often necessary to train predatory saltwater fish to accept nonliving foods such as frozen fish.

Culturing Live Foods for Marine Fish
Live foods for the saltwater aquarium can be cultivated at home. You will need some extra space and equipment, but the added effort will pay off in healthier, more vibrantly colored fish and thriving invertebrates.

Larval brine shrimp, known as nauplii (singular, nauplius), have been used for decades as fish food. They are rich in nutrients and can be easily hatched from the resting cysts, often incorrectly referred to as brine shrimp eggs. The ability to breed and subsequently rear saltwater fish in hatcheries depends upon the use of brine shrimp nauplii, once the fry grow large enough to take them. The cysts, nearly indestructible, keep for months, even years, with proper storage. They are collected from evaporation ponds and other highly saline environments, and look like coarsely ground cinnamon. Hatching them is a cinch. Fill an empty wide-mouth quart jar with water up to the shoulder and add two tablespoons (about an ounce, or thirty grams) of synthetic seawater mix. (Seawater mix is available wherever saltwater aquariums are sold.)

Drop in an airstone and connect it to a pump. Aerate the water vigorously. You will want to locate your brine shrimp hatchery where the salt spray will do no harm, as it is impossible to keep it from splattering out of the container. The jar should be in a spot that remains around 75–80°F. Bright, indirect light will improve the yield of the hatch, but keep the jar out of direct sun, or it will get too warm. As soon as the salt mix dissolves, add 1/4 teaspoon of the cysts. They will hatch in twenty-four–fourty-eight hours, depending upon the temperature. The warmer the water, the quicker the hatch. You can see the tiny nauplii swimming jerkily in thewater. When you are ready to harvest, turn off the aeration. This will allow the empty cysts to float to the top of the container. Separating the cysts from the shrimp is the main difficulty in using brine shrimp nauplii. If the cysts are added to the aquarium, they will form an unsightly ring just above water level, and they can be harmful if fish ingest them. The nauplii are attracted to light, and you can exploit this trait to collect them.

Make a sleeve out of thin cardboard that will encircle the jar, cutting a one inch hole just above the bottom. When you are ready to harvest shrimp, place the sleeve around the jar and shine a flashlight into the hole. The shrimp will gather at this point, from which they can be siphoned out with a length of flexible plastic tubing. Trap the nauplii with a net, and rinse under the tap before adding them to the aquarium. They will be relished by virtually all tropical fish. Like the adults, the nauplii survive only about an hour in fresh water, so feed accordingly. Try to feed your entire hatch within forty-eight hours because the nauplii will lose much of their nutritional value during that time.

BRINE SHRIMP ADULTS - Culture
Nauplii can be grown to adulthood if you have the space. Fill a shallow container that holds at least fifty gallons, such as a child’s plastic wading pool, with synthetic seawater prepared at the ratio of four ounces of dry seawater mix per gallon. The container should be located in bright light but out of direct sun. Add a pinch of soluble garden fertilizer (such as Miracle-Gro) and a quart of either natural seawater collected from the ocean or water from an established saltwater aquarium. After a couple of weeks, the water in the rearing container will be green with algae growth. Hatch the cysts as just described and add the nauplii to your rearing pond. They will feed on algae and grow to adulthood in about two weeks. You can feed them to your fish at any point. About once a week, add another batch of nauplii. In this way you will be able to grow a continuous supply of adults. When harvesting the adult shrimps, use a net with relatively open mesh, so smaller individuals can escape and grow.

ROTIFERS
Rotifers are nearly microscopic invertebrates that swim by means of specialized structures unique to their phylum. The saltwater rotifer, Brachionus, has been extensively used to rear larval saltwater fish. Cultivation of rotifers requires that you also culture the single-celled algae on which they feed and may not be practical to do at home.

PHYTOPLANKTON
Single-celled marine algae, collectively known as phytoplankton, are an important part of the diet of many filter-feeding organisms. If you have the space and equipment, phytoplankton can be cultivated, but most enthusiasts opt for commercial products. Believe it or not, bottled phytoplankton can be stored under refrigeration for several months.