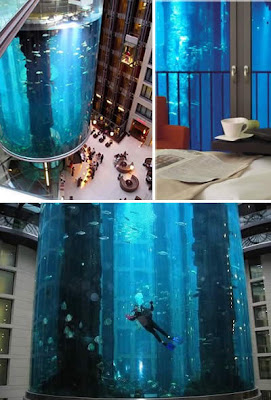 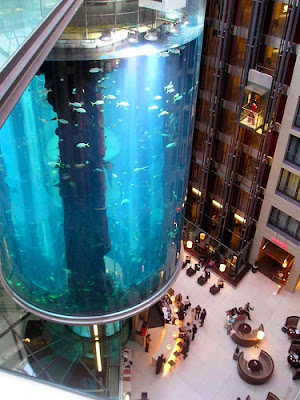 The AquaDom breaks all records as the largest cylinder aquarium in the world, at over 25 meters high. Filled with about 900,000 liters of seawater, it contains some 2600 fish of 56 species. It is placed at the lobby of the Radisson SAS Hotel in Berlin.

Combined with a vast amount of sandblasted glass, the giant AquaDom gives a transparent-like feeling to the lobby. Guests and visitors are able to travel through the aquarium in a glass-enclosed elevator to reach a sightseeing point and restaurant under the glass roof. Two full-time divers are responsible for the care and feeding of the fish and maintenance of the aquarium. The AquaDom was opened in December 2003. It cost about 12.8 million euros. 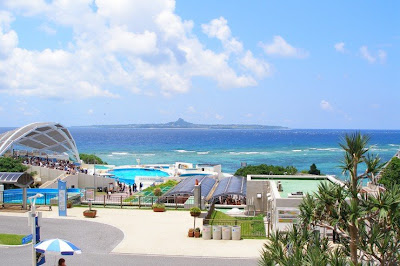 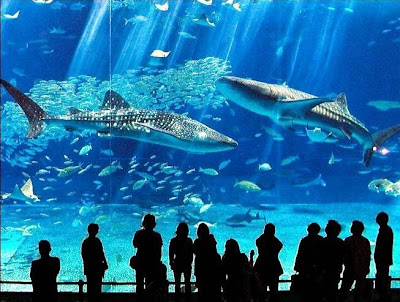 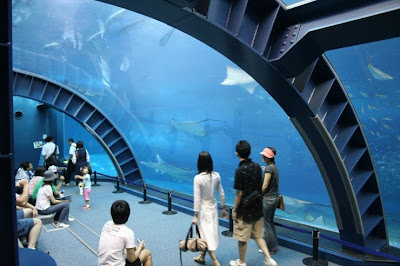 The Okinawa Churaumi Aquarium is the world's second largest aquarium and part of the Ocean Expo Park located in Okinawa, Japan. The main tank holds 7,500-cubic meters of water and features the world's largest acrylic glass panel, measuring 8.2 meters by 22.5 meters with a thickness of 60 centimeters. Whale sharks and manta rays are kept amongst many other fish and plant species in the main tank.

The aquarium is currently trying to breed Whale Sharks. 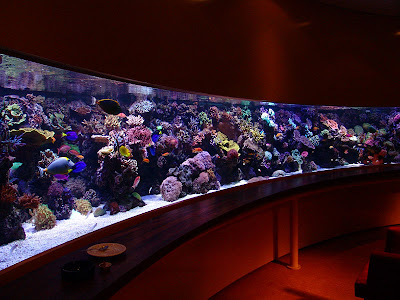 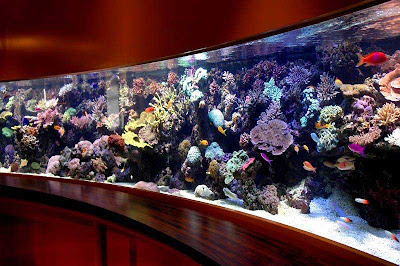 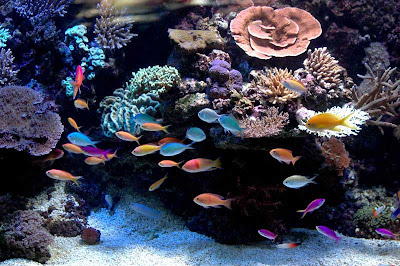 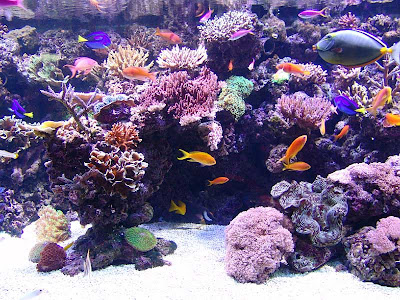 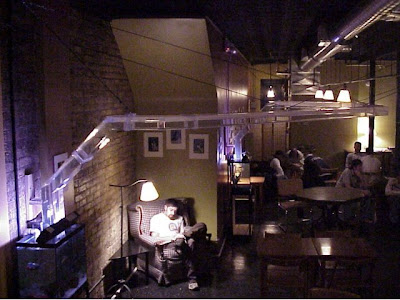 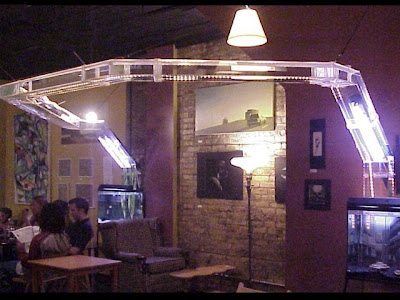 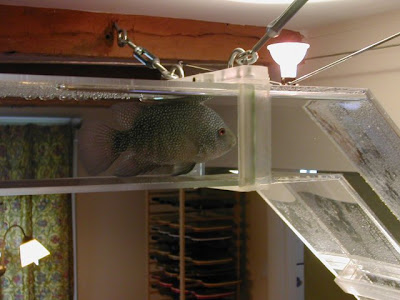 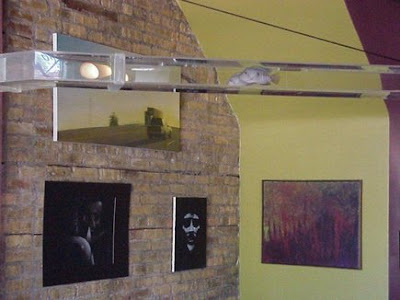 The Fish Highway is a water-filled overhead tunnel connecting two (or more) aquariums. As long as no air gets in, fish can travel from one tank to another! For a simpler version, you might try the Fish Condo, which is three connected fishbowls. 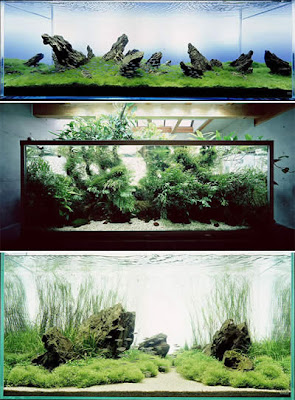 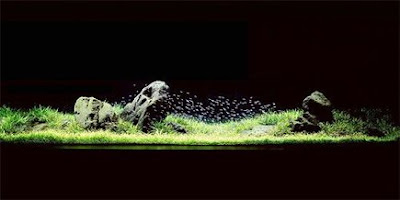 The aquarium can be work of art, or it can be the medium for art. Takashi Amano introduced Japanese gardening techniques into aquascaping, turning them into displays of natural art. 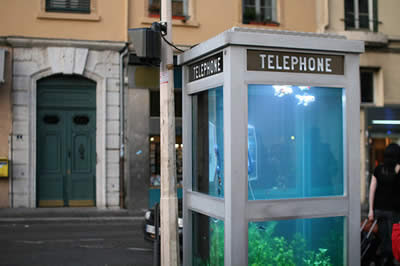 Benoit Deseille and Benedetto Bufalino turned a phone booth into an aquarium as part of Fête des lumieres 2007 (Light Festival) in Lyon, France. 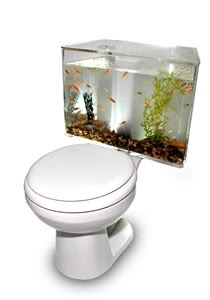 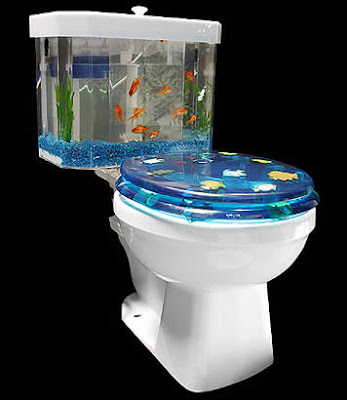 Teach a man to fish, and you have fed him for a lifetime. Put some fish in a man's toilet, and he will never have a boring trip to the pot again. This is the clever thinking behind the Fish 'n Flush.

Fish 'n Flush is a patented, two-piece aquarium toilet tank, designed by AquaOne Technologies, Inc., an innovator of water-management systems. The aquarium has a 2.2-gallon capacity. When you flush, it looks like all the water is draining out of the tank and the fish are going down, but it's an optical illusion: the fish are actually safe in an outer aquarium made of high-polished plastic. What you see draining is the toilet water in a separate tank behind the aquarium. 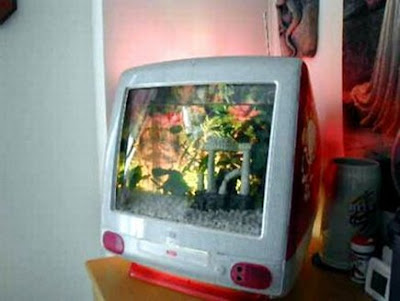 Ever wondered what to do with that ancient 26" wooden TV set laying around in yours or your grandparent's garage? Here's a perfect destination for it! Even if you don't have the old TV, it shouldn't be too hard to buy one for almost nothing, and in no time you can have your favorite program broadcasting all day long, with no commercials.

At the Siam Ocean World in the Siam Paragon shopping center in Bangkok, there is a fabulous car there that cannot be driven. Why? Because it is filled to the top with water!

Dozens of fish call this extremely modified vehicle their home. And just so you know, the doors to this car are welded shut just in case any mischievous person thinks it funny to release that much water and fish onto the mall floor. 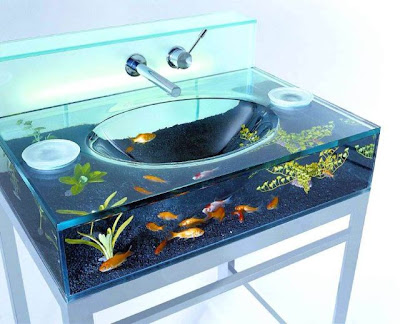