The South American Corydoras genus is a freshwater temperate and tropical fish and is also the sole genus in the armored catfish subfamily Coradinae. The name Corydoras is derived from the Greek kory(helmet) and doras (skin) – referring to the fish’s armor. Aquarists commonly refer to them as corys, or cory catfish. Corydoras is by far the largest genus of neo-tropical fishes, with more than 142 species. In addition, many variants exist; in fact, several hundred Corydoras species are not yet classified, but are nevertheless kept by aquarists.

Corys are small fish, ranging from 25 to 120 millimetres. They are native to the slow-moving and almost still (but seldom stagnant) streams and small rivers of South America, or in smaller-sized streams, along the margins of larger rivers and in marshes and ponds, where the water is shallow and very clear. The banks and sides of their habitat are covered with a dense growth of plants, and these are the areas where the corys are generally found. Most species of this family are bottom-dwellers, and they forage in sand, gravel, or detritus. 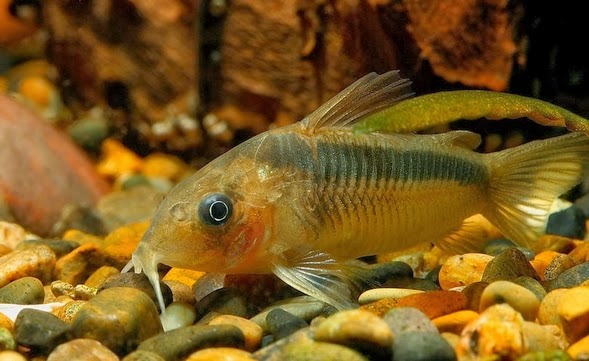 They inhabit a wide variety of water types but tend to prefer soft, neutral to slightly acidic or slightly alkaline water. They can tolerate only a small amount of salt (some species tolerate none at all) and do not inhabit environments with tidal influences.


Corys are often seen in shoals. Most species prefer being in groups and in the wild many are found in schools or aggregations of hundreds or even thousands of individuals, usually of a single species, but occasionally with other species mixed in. Unlike most catfishes which are nocturnal, Corydoras species are active during the daytime.


In the wild, their main food is bottom-dwelling insects and insect larvae and various worms, as well as some vegetable matter. Although corys are not piscovores (fish-eaters), they will eat flesh from dead fishes. Their feeding method is to search the bottom with their sensory barbels and suck up food items with their mouth, often burying their snout up to their eyes. This is one of the reasons a soft sand substrate is preferable for corys.


A unique form of insemination has been described in Corydoras aeneus. When these fish reproduce, the male will present his abdomen to the female. The female will attach her mouth to the male’s genital opening, creating the well-known “T-position” so many Corydoras exhibit during courtship. The female will then drink the sperm. The sperm rapidly moves through her intestines and is discharged together with her eggs into a pouch formed by her pelvic fins. The female can then swim away and deposit the pouch contents somewhere she considers safe. Because the T-position is exhibited in other species than just C. aeneus, it is likely that this behavior is common in the genus.

The Corydoras genus is well known among aquarists for its many ornamental species. They are well suited to tropical freshwater community aquariums, as they get along well with other species, as they are not aggressive at all. Although they’ll consume bite-sized items such as eggs or fry, aggression towards other species is virtually unheard of. Intra-specific hostility is similarly unusual, occurring in only a handful of species, mainly being confined to the “long-nosed” varieties. Provided space isn’t an issue, this rarely results in physical damage. In fact, many types of Corydoras are quite timid and therefore it is highly recommended that they be kept in shoals of a minimum of three, although a group of at least six really is best, as they’re far more confident and active in the presence of con-specifics. 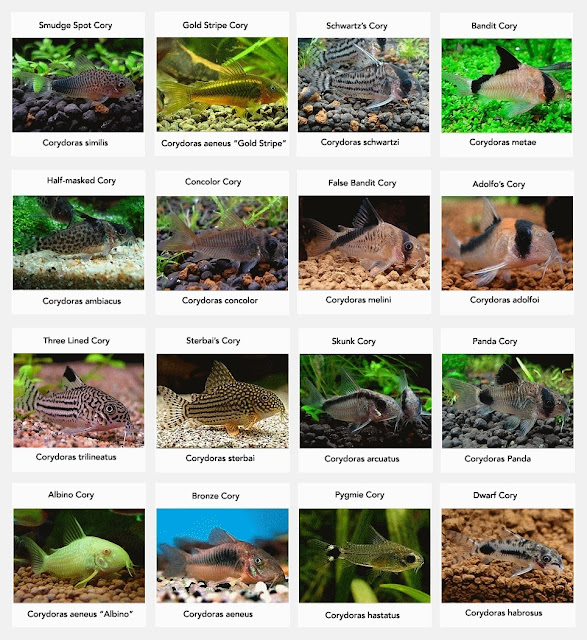 Corys are omnivorous and are mostly bottom feeders, so offer a good quality sinking pellet or tablet as the staple diet, but supplement this regularly with live and frozen foods such as Daphnia, Artemia, bloodworm and similar. If flake foods are used, special care should be taken to prevent these from being eaten by faster moving tank mates at the higher levels of the aquarium tank.

As we said, most corys prefer soft, acidic water, meaning 6.0 to 7.6 pH, and a temperature range between 24 to 28°C. They can, however, tolerate a wide range of water conditions, including temperatures that are cooler than tropical. However, they do not do well in fish tanks with high nitrate levels as nitrate leads to the infection of their barbels, which result in shortening and eventually loss, removing the fish’s sensory tool for finding food. So a good maintenance regime is essential with this species. As with all corys, don’t use undergravel filtration and ensure the substrate is kept scrupulously clean. Their barbels may also be affected by constant contact with a sharp substrate. They are more likely to thrive if there is an open area of soft substrate, like river sand,  on the bottom of the tank where they can go to obtain submerged food. Aquatic plants are not a feature of this species’ natural waters, but they do well in well-planted tanks.

These fish are easy to keep – they are peaceful, small, hardy, active, and very entertaining. But do not place them in with large aggressive tank mates. Their longevity in the aquarium is noteworthy; C. aeneus is said to have lived 27 years in captivity and a lifespan of 20 years is not uncommon. Occasionally corys will dart to the surface, and stick their snouts above the water for an instant to take a “breath” of air. This behavior is perfectly normal and is not an indication that anything is wrong with the fish. All corys are facultative air breathers, meaning they have the ability to breathe atmospheric air to a certain extent, if necessary. They possess a modified, highly vascularised intestine to aid in the uptake of atmospheric oxygen. This adaptation allows them to survive if their habitat becomes oxygen-deprived for any reason. However, if surface breathing happens in excess, it can indicate poor water conditions.


Lastly, remember that Corys are part of the “armoured” catfish group, and instead of scales possess two rows of bony plates running along the flanks. They also have very sharp pectoral fin spines, which are easily caught in the mesh of aquarium nets and can also produce a painful “sting” if they penetrate the skin. Care should therefore be exercised when handling or moving corys for any reason. 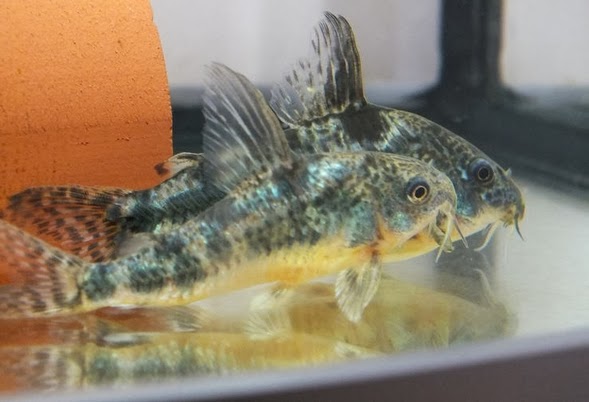 Select two trios (two males to one female) of breeders and transfer them into your 20 gallon high breeding tank with water of the same temperature as your conditioning tank (70-74 degrees F.). Let them acclimate to their new environment for a few days. Keep feeding them 4 times a day. On the third day or so, start adding slightly cooler water at night to your half filled tank at 2-4 degree increments. One gallon per day should do it. The object is to get the water temperature down to about 65 degrees. If one gallon doesn't bring the temp down enough, try 2 gallons a day. If the fish haven't spawned by the time you get the tank at 100% water level, siphon out 50% and repeat the process. If conditioned properly, the corydoras should breed within a few days.